A day at the beach

For a project in The Netherlands, in July 2020, we were asked by Bureau Schrijvers (an engineering company in The Netherlands) if we were interested to participate in a tender process. It concerned a relatively small job of only 800 or so metrers for a Fibre Optic Cable (FOC), undercrossing the dunes, beach and surf zone, starting from a parking lot in IJmuiden (NL). Construction was foreseen in February 2021. The interesting part was the focus on the emissions, especially Nitrogen oxides (NO)x. All over the world, but even more so in the densely populated Netherlands with traffic, heavy industry and a very high number of live stock producing NOx, emissions resulting from construction activities are under scrutiny. In 2019 the Supreme Court ruled that all new construction sites must give the highest effort to minimise emissions and special calculations must be performed to determine the impact of the construction and to verify if within the set borders. The use of LMR´s 100 T all electric rig enabled a significant reduction of the emissions. Further reductions were achieved by using state of the art equipment, with stage V trucks for the transport of the equipment, low emission generators and an excavator on site with similar technology.

In September, we submitted a bid, proposing three options, with various effects on time of execution, material to be installed, weather risk and flow of bentonite into the sea. After some meetings with the client, early October, we were informed that our solution to drill the pilot hole and leave the drill pipe in place as the conduit for the FOC to be installed in was their preferred option, with LMR being the designated contractor.

Since the execution of the works was foreseen to be in February, many details had to be sorted, and assistance from our side was requested to ensure permits would be in place in time.
And although the contract was not signed yet, in an atmosphere of mutual trust, LMR started with the detail engineering. As the UK based client was represented by MDM, an Irish engineering company, our Dutch employees were a welcome addition in the preparations. We were able to assist in obtaining the permits and with information to and from the local authorities and other stakeholders, to ensure our activities would cause as little as possible nuisance and interference to the normal operations. Our site location was the main parking for the visitors to the beach in IJmuiden, and our equipment would be taking a considerable number of parking spaces, closest to the beach entrance. We also had early meetings with the off shore cable laying contractor to solve the interfaces, such as the retrieval of the off shore end and the messenger wire details.

During the detail engineering, some adjustments were made to the scope, with the main item being a 40 m length of DN 125 HD-PE pipe to be installed at the seaward end of the conduit.
With the contract being signed in December, we were ready for execution of the works, as scheduled in February. However, as the archaeology and UXO surveys were not ready in time, the works were postponed. A new time frame was agreed, for the works to start in April, with the crew travelling to site right after the Easter weekend. Due to the Covid-19 regulations, the German crew was tested before departure to site and had to go into a 5 days quarantine. The local crew members, as well as the client’s superintendent, tested negative as well and travelled to site to for the start of the works. All stayed in the same hotel, thus creating a ‘bubble’ and minimising the risk of infection. Furthermore, all crew tested themselves every morning before going to site. With the crew in quarantine, the site was fenced off and the site offices were installed before prior to the weekend. The transports arrived on site Monday, having the equipment set up and ready to drill on Tuesday afternoon.

Pilot hole drilling started off well, with good returns. As expected in this area, the jetting assembly was very easy to control and the profile was followed nicely. Unfortunately, despite the description in the boreholes, the sand we were drilling was not coarse, but rather fine. This caused some delays in the drilling programme as the recycling had some difficulties getting all the fine material out. Nevertheless, punch out on the seabed was on route and confirmed to the marine subcontractor, to arrange the tugs and have the barge ready for mobilisation, as scheduled.

Unfortunately, returns slowed down after 67 joints were drilled, and, despite an effort to restore those by puling back some joints, they could not be regained. In consultation with the client, it was decided to continue drilling while inspecting the beach at regular intervals. As the drilling continued, the parameters were closely observed, but no increase in torque nor push/pull forces were noticed. Most likely explanation for the loss of returns is that a bank of shells or other coarse material was drilled, causing the mud to disappear.

At the end of the pilot hole, with only a couple of joints to be drilled, drilling was halted, to avoid early punch out and deterioration of the mud due to salt water. The following morning, the barge left the Beverwijk port at 5 am, to arrive on site in time for the high tide; Only 2 m above NAP was predicted, barely enough for this barge with the large crane. Once in position, the spuds were lowered, and the hull lifted to avoid it to hithitting the seabed. During this operation, the bit punched out onto the seabed. Air was pumped to unveil that the exit point was indeed as expected, next to the barge.

The bit was lifted on board of the barge and the BHA disconnected. A 5 mm steel messenger wire was attached to the wireline which was pulled back to on shore. A cross over was mounted on the drill pipe and the 40 m of PE pipe was connected using a flange. Anchors were attached at the end cap with buoys for easy recovery and the entire string and PE were pulled back into the borehole. Approximately 5 m of PE were left sticking out, controlled by the anchors.

As soon as the tide allowed, the spuds were retracted, and the tug pulled the barge back to port. The following days the equipment was demobilised, and a manhole installed. Using a flexible section, the drill pipe was flanged to the concrete box, and the steel messenger wire secured inside.

As soon as the equipment was demobilised, the fences were taken down and the area cleaned of debris. The parking area was handed back to the city, with the project being completed on site within two weeks, after nearly 6 months of paperwork. 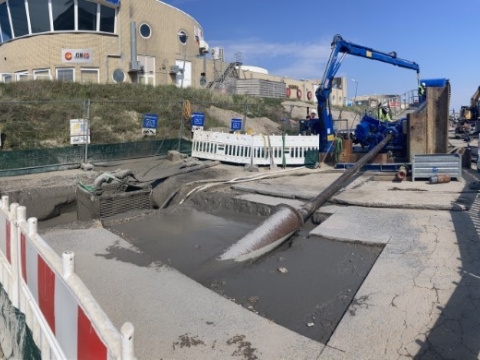