Dogger Bank is a relatively shallow water area in the central North Sea and ideally suited for the placement of Offshore Wind Turbines. Several Projects to construct such windfarms on Dogger Bank are at various stages of planning and construction. Two such projects and first to begin construction are ‘Dogger Bank Offshore Wind Farms A & B’.

The Project is being developed by a 40:40:20 JV between Equinor, SSE Renewables and Eni and, as well as the windfarms, required a total of 4 no. HVDC cables linking the onshore and offshore converter stations. These cables came ashore in the UK between the Humber Estuary and the coastal town of Bridlington (see fig.1).

As with much of the North Sea coastline of the UK, the inshore waters are relatively shallow, and the coastline is eroding at rates of up to 5m per year. To ensure that the cables were adequately protected, the Client demanded that the landfall section of the cables were installed through ducts that were buried to sufficient depth to avoid potential exposure during the design lifetime of the cables. The topography meant that a trenchless solution was required.

The Principal Contract for the installation of these offshore cables was awarded to NKT and their scope included the landfalls. LMR Drilling UK Ltd. have worked for NKT on many such landfalls and were awarded the subcontract for these 4 no. landfall drills in June 2020. NKT and the Client’s preference for the landfalls was for long HDDs out to deeper water avoiding the need for trenching through the high energy intertidal zone. Key to the feasibility of such drills was a good understanding
of the ground conditions.

At tender, the Client provided onshore boreholes and offshore geophysical surveys which indicated glacial till overlying chalk. With contracts awarded, the Client, NKT and LMR were soon discussing what further ground investigation was required and it was agreed to undertake an offshore borehole campaign as well as perform some additional onshore boreholes, specifically to assess the permeability of the chalk. The results of these surveys and the geological conditions along the route
of the drills are illustrated in figure 2.

The results of these additional works were generally positive and confirmed to all parties that the long drill solution was feasible. LMR’s subcontract works were confirmed to be the installation of 4 no. ducts, each with a length of 1,400 m and with a minimum internal diameter of 300 mm. Detailed structural calculations were performed in house (by BPN) and when compared with projected installation loads, confirmed that 324 mm x 10 mm steel cable ducts would have sufficient strength
to serve as cable ducts. The installation of such steel ducts was first developed by LMR for similar landfalls in Klaipeda, Lithuania and have the advantage over more conventional PE ducts in that they can be installed from land without the need for marine support.

The drill profile design had to take into consideration the results of the permeability data obtained from the site investigation works as well as the challenges associated with the various geological formations. Alternative drill profiles are illustrated in figure 3. The central profile was eventually chosen as the more permeable chalk layer (green) would be encountered even on the shallower drill profile and the deeper drill profile meant passing through the grade A chalk (grey) where permeability was highest.

Cable duct production began in September 2020 before mobilisation of one of LMR’s 250t drilling spreads and site personnel in November 2020. The holes into which the ducts were installed could be constructed in a single phase of pilot drilling with 445 mm diameter pilot holes. This technique was another first introduced into the HDD industry by LMR in 2001 to reduce the risk associated with drilling through extremely strong rocks. It has shown many benefits in a wide variety of ground
conditions on projects where this technique has been chosen. On this project, one significant advantage was that it avoided the need for additional stages of hole enlargement during which there is greater risk of loss of drill fluid into the marine environment.

Pilot drilling on the first of the holes began on 3rd December 2020 with 300 m of pilot hole drilled before shutting the site down for the festive break. On return in early January 2021, pilot drilling continued for a further 300m until an unexpected challenge presented itself in the form of the rare phenomenon of differential sticking. This force effectively ‘sucked’ the drill string to the walls of the hole and despite being able to apply loads of 200t and 90kNm it proved impossible to move the drill
string. With LMR’s resources and experience we were able to mobilise a string of 13⅜” drill pipes from Oldenburg to site to run over the jammed string of drill pipes. The pipe was successfully freed and pilot drilling could continue. A repeat of this problem was avoided by mobilising additional personnel and moving from a 12/7 to a 24/7 schedule for the remainder of the project.

One key aspect of the design requirements for such cable landfalls is a need to conform with minimum separations between drills which varies with the depth of the drill below ground level (the deeper the drill, the greater the separation). In order to ensure that these criteria had been met, geophysical surveys at the drill exit points were performed for each drill so the actual exit point was known and the as-built could be adjusted to reflect this data. This process worked well, was costeffective
and avoided the need for diver works associated with more conventional measurements. The images that these surveys produced are shown in figure 4.

The final duct installation was completed on 3rd June 2021 with the drilling process being a great success. NKT and the Client were both very satisfied with the results and the performance of the crew both in terms of managing the drilling works and the challenges presented by the COVID 19 protocols. No Covid infections were recorded amongst the crew despite a total of 34,000 manhours worked to date and a big thank you to all involved in this fantastic achievement. Once again, LMR’s
world-leading levels of experience, personnel and equipment contributed to the success of another challenging HDD Project. 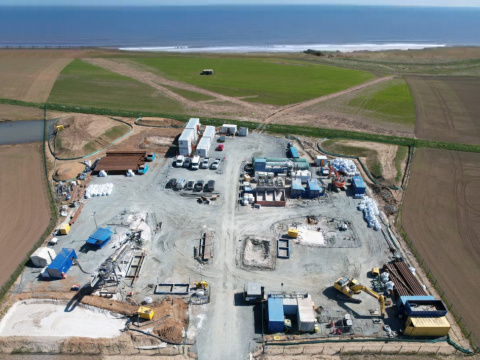 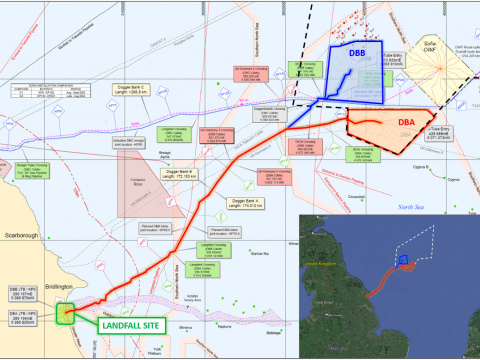 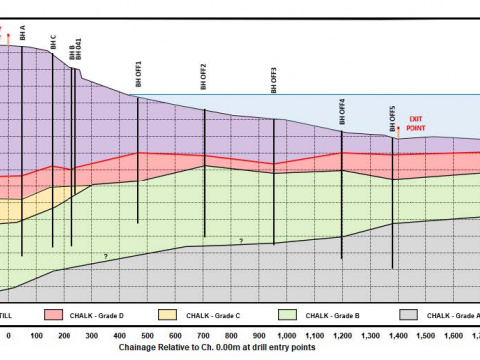 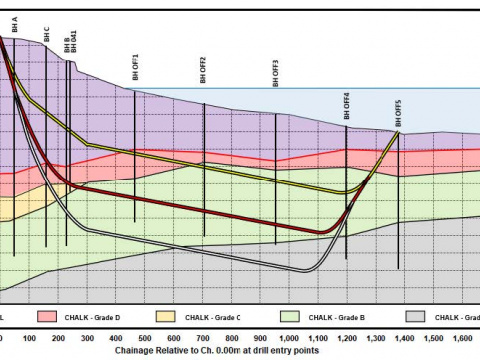 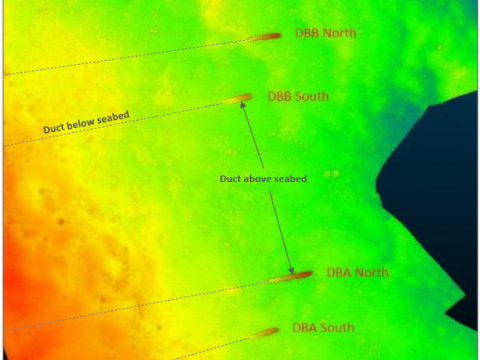